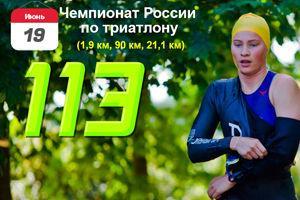 The history of triathlon in Russia is inseparably connected with Saint Petersburg. In 1990 it hosted the first Championship of USSR, the first time one stage of European Cup took place in Saint Petersburg in 1997 and the first Russian Olympic Games challenger was also from the Northern capital.

In 2000s the development of professional triathlon in Saint Petersburg slowed down, However, enthusiasts organized amateur races in the suburbs of Saint Petersburg – Zelenogorsk, Vyborg, Volosovo, settlements of Budogoshch, Toksovo and Orekhovo. These all helped to maintain the interest to this type of sport.
In 2005 A1 TRIATHLON team set itself an ambitious goal – to organize mass competitions of European level for professionals and amateurs in order to return the title of the triathlon capital to the city. Last summer Kurortny District hosted three competitions: after a successful debut on half-Ironman distance on July 5th the organizers were granted the right to conduct the finals of Russian Cup and the Cup of Russian Triathlon Federation (RTF) which took place on August 29th-30th.

Each competition brought together more than 350 sportsmen including professionals and triathletes from other countries. Competitions were conducted with support of the Administration of Saint Petersburg and were included in the list of sporting events of 2015. The representatives of RTF noticed the high level of competitions and huge prospects for the future cooperation with A1 competitions to develop and promote triathlon in Russia.
That is why RTF chose A1 team to organize the Russian Triathlon Championship in long distance which will take place on June 19th 2016. The same day amateurs will try themselves in A1 TRIATHLON 113 race with half-Ironman distance (1,9 km swim, 90 km bike and 21,1 km run).

The competitions will take place on the route in Sestroretsk (Kurortny District of Saint Petersburg) which was highly appraised by A1 competitors in previous races. The first stage will take place in aquatic area of Razliv Lake, 90 kilometers cycling stage will consist of two laps by Primorskoe highway in the direction of Zelenogorsk, and the final stage is plotted in the streets of Sestroretsk where competitors will be supported by relatives and locals. You may look at the route and see regulations to the competition on our website https://a1.ru/starts/a1_triathlon_113_2/.

Flat asphalt ideal for riding, active support of fancies and spectacular finish on the territory of summer-time recreative project Petrovsky Arsenal are waiting for sportsmen. The event is expected to be a real sport festival not only for triathletes but for the spectators as well – Petrovsky Arsenal will have interactive zones, recreation areas, master classes for adults and children.

Top athletes, challengers to be included into National Triathlon Team, will compete for the title of Champion of Russia in Sestroretsk. As for amateur competition – anybody who is willing to take part in it is welcome to apply on our website http://a1.ru/starts/a1_triathlon_113_2/. Be among the first, register to the race and start preparing to the main race of the coming year today!
Возврат к списку