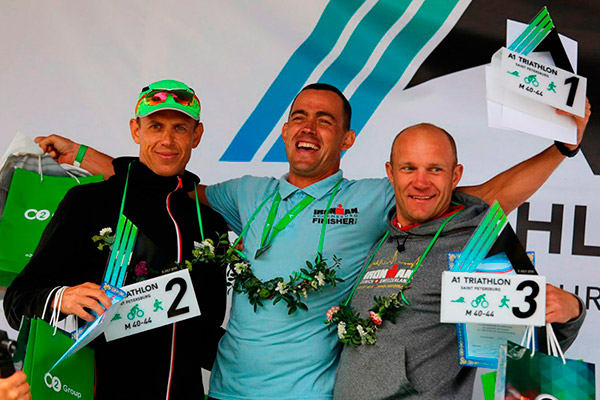 Last Sunday, on July 5th the long-waited A1 TRIATHLON Saint Petersburg 2015 race took place in Petrovsky Arsenal. The competitions were held with support of Administration of Saint Petersburg and were included into a list of key sporting events of 2015. Professional athletes as well as amateurs from Russia, Italy, Finland, Bahrein and Azerbaijan were passing the so-called half-Ironman distance which consists of three stages:  1.9 km swim, 90 km cycling race and 21.1 km run, between which the sportsmen spend only a few minutes in a transition area to get changed and change sports equipment.
This was the very first competition of such a large scale in the North-West Region: A1 TRIATHLON Saint Petersburg 2015 brought together 368 athletes, setting a record for debut competitions.  В стартовом протоколе было зарегистрировано 218 individual competitors and 50 relay teams were registered in the start protocol. On the opening ceremony of A1 TRIATHLON competitions sportsmen were  saluted by honourable guests of the competition: the President of Russian Triathlon Federation (RTF) Sergei Alekseevich Bystrov, Councillor of the Chairman of Committee for Physical Culture and Sport  Pavel Dmitrievich Platonov, Vice-President of Saint Petersburg Triathlon Federation Oleg Alexandrovich Loginov and the representative of Department for Physical Culture and Sport of Kurortny District Michael Yurievich Zakharov. The President of A1 TRIATHLON Viktor Osokin outlined that the main goal of the Organizing Committee was to have a high-standard competition in Saint Petersburg which would be for both professionals and amateurs alike.
On July 5th at 8:00 a.m. those taking part in half-Ironman distance started from the Officers´ beach and in just 25 minutes the leaders of the race got to the first transition area. After 90-kilometres cycling stage laid out through the shut-off track in picturesque Kurortny District, A1 athletes went on to the running stage 21.1 km long. One section of the running route went along Petrovsky Arsenal where the athletes received strong support from spectators. Triathlon fancies greeted the competitors all along the track as well as in the aid stations where sportsmen could recover their strength during the grueling race. As sportsmen marked it themselves, support from the fancies and volunteers´ help had a really good impact on their racing performance.
President of RTF Sergei Alekseevich Bystrov, A1 TRIATHLON President Viktor Osokin, director of the competitions Evgeny Nikitin and the senior judge Anton Uik as well as large support team congratulated the sportsmen at the finish arch. The leader´s finish was really fascinating: Georgy Kaurov, who covered the half-Ironman distance in 4:00:16, crossed the finishing line with deafening applause of the fancies. Soon after that Andrey Liatsky (4:03:14) and Anton Kozlov (4:04:31) joined the winner in a recovery zone.
The triumphant of A1 TRIATHLON competition, a member of a profesional team JusTTri Georgy Kaurov stated right after finish that for him it had been an incredible race on an excellent track and thanked the organizers for professional preparation and their attention to every detail which altogether constitute the general impression about the competition. The fastest Russian Ironman sportsman Andrey Liatsky who took the second place among professionals also noted high level of the event. ´The race undoubtably met the high standards of large international competitions; I am sure that by now this is one the best races in Russia by organization level, I´m very pleased we have got such a home race. I am sure A1 TRIATHLON competitions have great prospects´ - he outlined.
A1 TRIATHLON medalist´s words were confirmed by the President of RTF Sergei Alekseevich Bystrov who revealed the plans of the Federation concerning the development of triathlon in our city: ´There is a preliminary arrangement with the President of International Triathlon Union (ITU) Marisol Casado about conduct of one stage of Triathlon World Cup in Saint Petersburg. However, together with A1 team we should begin with official national competitions first where the top athletes of the country and national selection could take part. The director of the competitions Evgeny Sergeevich Nikitin confirmed that the first A1 TRIATHLON race demonstrated ability to host top professionals from all over the world.
Results of the competitions anxiously awaited by all A1 TRIATHLON competitors were ready along towards evening.  Awards were given in 13 nominations; on the whole over 60 sportsmen were awarded, including special nominations to the oldest and the youngest athletes, as well as a special participant – Paralympic athlete Vladimir Riabokon who covered the half-Ironman distance on equal terms with other competitors.
PRO: Georgy Kaurov, Andrey Liatsky, Anton Kozlov, Timur Srurtdinov, Ivan Kharin.
Men 55+: Andrey Perman, Alexander Korotkov, Konstantin Ptsarev.
Men 45-54: Igor Pimenov, Viacheslav Gromov, Konstantin Grigoriev.
Men 40-44: Rostislav Bzhevsky, Alexander Tots and Vitaly Kulikov.
Men 35-39: Eduard Tulisov, Alexey Spiridonov, Denis Malin.
Men 30-34: Dmitry Iliin, Artem Prilepov, Nikolai Karpinsky.
Men 25-29: Pavel Kukolev, Aleksandr Gorbachenko, Mikhail Ulianov.
Men 18-24: Nikolai Pyzhov, Dmitry Zaloga, Aleksandr Levchuk.
Women 31+: Viktoria Shubina, Elena Akimochkina, Anastasia Volodina.
Women 18-31: Olga Krutenyuk, Marina Rostovtseva, Viktoria Zarina.
Male relay teams: Dusty dumbbells, Yula Team RVA, World Class Team.
Female relay teams: Honey, Henfish, Speedy Pants 2.
Mixed teams: Yula Team 3, 3tons Band and Smile Tri team.
The Organizers particularly congratulated the birthday man of the competitions Andrei Perman who took the first place in his age group on his jubilee day: he celebrated his 55th birthday on the track of A1 TRIATHLON.
The next A1 TRIATHLON races for Olympic and Sprint distances is scheduled on this year August 30th and the Organizers will do their very best to ensure the status of an international triathlon competition. Registration to the race will soon start on our website.